I am a 24 year old male to female transsexual living close to Norwich. I have been dressing up as a a woman since I was 14 and had nylon led sexual fun since my early teens. Often wanking myself whilst wearing a pair of sheer stockings. The result is that today I have a very large wardrobe of clothes and shoes, I am completely smooth all over apart from a landing strip and have manicured nails and shaped eyebrows and with killer legs in high heels. I am single but I had this strong desire to go dogging. I fantasized about being dominated by big guys with their fat cocks out in the open. The problem was safety for me. I did not want to go to a hugely popular place or one that was miles away from me. So after looking at various swinging sites I joined Dogging Action where I found a place that in fact was only about 2 miles from my home and planned to visit it on a Tuesday night. Tuesday arrived and I was both very excited and incredibly nervous, I bathed, made sure I was again 100% hairless and thought what should I wear? Easy decision, a black jelly push up bra which gives me a great cleavage, a black waist clincher, black thongs, black sheer hold ups and black 5″ court shoes. A black elasticated mini skirt and a transparent white blouse. I chose a dark brunette wig and a mid thigh rain coat to finish my TS look. I finished my make up with shaky hands, lubed up and decided that I needed a stiff brandy before I left. 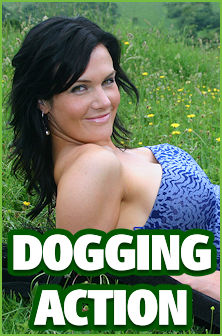